Coping with a rare disorder 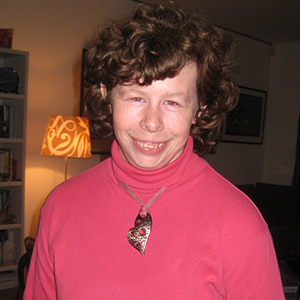 Our daughter Natasha was born with William syndrome in 1982 although at the time we didn't know what was wrong with her.

WS is a rare condition occurring in approximately one in twenty thousand live births. WS babies develop severe feeding difficulties in the first year of life with problems including vomiting, constipation and a refusal to feed. They may be irritable and cry excessively. Some children, but not all, have raised calcium in their blood and should be placed on a low-calcium diet when typically feeding difficulties improve. WS children have a distinctive facial appearance and cardiac problems.

Natasha spent the first two days of her life in intensive care where her heart murmur was monitored and various blood tests were taken. We know now her distinctive facial features and poor muscle tone were noted and puzzled over. Not too much was said and we were relieved the heart murmur was not immediately life threatening as our daughter born before Natasha had died of a congenital heart disorder (Hypoplastic Left Heart syndrome) at 32 days.

Natasha returned to the ward and on the third day, cried and would not eat. We remember thinking she looked Asian. Natasha has pronounced epicanthic folds, a little turned up nose, biggish lips with a wide mouth, curly hair and now a winning smile.

Her crying lasted around 20 hours a day for seven months and continued at a less ferocious rate until she was two.

We learned to sleep in shifts. Survive on only a few hours sleep a night. Grandparents found more pressing matters in the country and vanished. Two baby-sitters fled in shock. And so-called friends became memories.

All Natasha's milestones were delayed. Her first babbling was at seven months followed by her first smile at 11 months.

From the early days we asked what was wrong and after consulting 3 paediatricians we started our own programme.

Physio, early intervention – you name it, we did it.

At fifteen months Natasha had a squint operated on and at the same time the diagnosis of William syndrome was made. We felt instant relief "now we have something to work with". I coped, my husband went into deep shock and we both felt a terrible despair. We were supplied with a piece of information copied from a text book. It did not tell us what we needed to know. The limited information we received was of a medical nature when what we needed initiallywas practical information.

The doctors told us they knew of only 2 other WS children in Australia, one family in NSW and one in the Northern Territory.

After many enquiries we found out there were support groups, one in the UK and one in America. Lots of valuable information was sent to us from both countries, especially England where extensive research is now being undertaken. Parents of children with disabilities need this type of information for their day to day survival. We shared this information with doctors whose experiences in the management of WS children was limited and with the small number of other parents who, like us, wanted a better understanding of the disorder.

We sent copies of the information including photographs to all paediatricians and cardiologists around Australia. We asked the questions "have you seen a child like this?"

The support groups started out of the need to share and help others and our first meeting of 12 families was held in 1985. As WS children all look like brothers and sisters it was a very emotional meeting.

Now there are support groups in each state, 350+ families Australia-wide and national conferences are held. Sadly, many of our members have had their diagnosis made in their 20's, 30's and even 40's when present-day care practices would almost certainly have been beneficial. With improved diagnostic methods the diagnosis of WS can now be made within one or two days.

Epilogue March 2012
Natasha is now 29 and as her 30th birthday is looming at the end of the year. We are reaching yet another significant milestone and we have fears for the future and who will care for her.

Natasha lives at home and has been attending a disability program since she left school. Her activities involve, pottery, literacy skills, voluntary work at a food distribution centre where she packs fruit and veggie boxes and social outings.

Highlights for this year include a trip to the UK to see her relatives and a 7 days cruise with her group to Noumea in October.