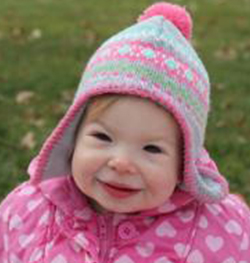 When Emmy was born, we didn't know she had Williams syndrome. But, after spending a few days with her, I could tell that something was different with our little girl.

One of my earliest indications came in the NICU when Emmy was just a few days old. She was originally admitted right after birth because her lungs didn't transition smoothly to the outside world. My husband, Dan, and I stood over the incubator that held our tiny baby. We were terrified, staring at our newborn who was hooked up to sophisticated machines that made alarming beeping sounds.

Even though Emmy appeared helpless, one of the nurses joked that our five-pound baby had quite a temper. Every time the nurse attempted to change her diaper, Emmy would get red in the face and shriek at the top of her lungs.

But on this day, when my parents came to visit, Emmy was content to lie in my dad's arms, offering the nurse a brief reprieve from the screaming fits she'd been throwing since she was taken out of my cozy womb. Now, Emmy's eyes were closed, and she appeared to be sleeping. Quite unexpectedly, a wide grin spread across her face. My heart stopped. This grin was larger than any other smile I'd seen. Further, it was so unlike my smile or my husband's smile. It was as if she knew a deep secret and was keeping it to herself.

My dad's eyes met mine, and I could see that we were both alarmed at her wide grin. Of course, everyone loves to see a baby's smile, but this felt unnerving. It was different, and I was afraid of different.

A few hours later, I was holding Emmy and noticed that her pinky fingers turned in. I asked the doctors about it, but no one was concerned. I surmised that I was just being a paranoid parent.

After eight long days, the doctors discharged Emmy from the NICU and told me that there was absolutely nothing amiss with my daughter. They concluded that she was perfectly healthy and would have no limitations in life. As a side note, they added she had a slight heart murmur, which would likely dissipate on its own. However, they told us to follow up with a cardiologist in one month—part of the usual protocol. I let out a sigh of relief as I snuggled close to my daughter. We were finally taking her home.

For the next month, we endured the piercing screams of little Emmy. Nothing could soothe our unhappy baby. There was not even a trace of that sudden wide grin from the NICU. Now, she just shrieked day and night. I thought back to the nurse's prescient words—she had never seen a temper like Emmy's. Well, I thought, at least this feistiness might serve her well in life!

One night, I was sitting with Emmy in our rocking chair until she finally fell asleep. I stared at her in the darkness and searched her face for some resemblance to my own. I didn't find any. A nagging feeling came knocking. Why didn't my daughter look as much like me as I thought she would?

When Dan and I took her for the requisite first visit with her pediatrician, the doctor looked her over from head to toe, turning her little body around in his strong hands. Finally, he proclaimed, "She appears to be very healthy, except for this heart murmur." He paused and then added, "I also noticed that she has small eyes."

The doctor ushered us out and, feeling bruised and insulted, we retreated to the car. Everyone knows that when you see a baby, the appropriate comment is, "Oh how beautiful!" Why would he say that her eyes were "small" without a positive adjective alongside? I would've even accepted "delicate," which has a much nicer ring to it. I couldn't figure out his motives but, as soon as we got home, I started searching for a new pediatrician.

At the end of the month, we dutifully attended Emmy's scheduled cardiologist appointment. I'd already researched the details of her heart murmur and discovered that it's very common for babies to have benign murmurs that disappear after a few months. I had finally stopped worrying and starting accepting the fact that she was undeniably healthy, as everyone had told me.

That cardiologist appointment changed everything.

The different facets of Emmy's heart were measured with an echocardiogram, and the cardiologist found that she had narrowing in her arteries, something that had gone undetected before. Moreover, the cardiologist told us that Emmy might have a genetic disorder called "Williams syndrome." But she cautioned us from jumping to conclusions until we could get a blood test from an expert.

Dan and I drove home in disbelief and confusion. When we got back to the house, I sat on the couch with Emmy and searched for "Williams syndrome" online. I found images that depicted the facial features that accompany this diagnosis. I poured over the pictures and compared them to my little girl. I found a list of traits that are common in Williams syndrome, and when I reached the bullet point that read "wide smile," I froze. Could it be?

I still wasn't convinced. But then I read about the pinkie fingers that can turn in, which gave me further pause.

And finally, I came upon one feature I had never noticed—a stellate pattern in the eyes.

Surely, Emmy didn't have a pattern in her eyes. I would have detected it.

As if in slow motion, I looked from the image to the baby resting in my arms.

"Emmy," I said softly, waiting for her to glance up.

She opened her eyes and looked straight at me. I felt my pulse quicken as I stared into a perfect stellate pattern. I didn't have to wait for the blood test to know why my baby didn't look like me. In an instant, I stepped through the door of a new journey, clutching on to what I used to believe and frightened of what I didn't know.

As time passed, I learned about Williams syndrome and how wonderful it really is. I made friends in this tight-knit community and got essential advice from others who have walked this path before. Early on, a parent told me that I would eventually be grateful for the diagnosis. At the time, I couldn't understand how that would be possible. But now, I know that parent was right.

Today, Emmy is almost a year and a half old, and she is a beautiful, spunky, funny, loving girl. When we go to the grocery store, everyone stops to comment on how cute she is. People will gaze at her shining, bright blue eyes and gush, "Look at those pretty eyes!" People also notice her full lips and say, "And those gorgeous lips!" Neither of these are my features. They are both gifts of Williams syndrome.

And then there's that wide grin that startled me in the beginning. Now, it melts my heart. It's true that she doesn't look just like me, but I can't imagine her looking any other way. Emmy is who she is, not who I am. Though, I'm told she'll develop much more of a family resemblance as she grows older. Everyone already says that she looks just like my husband.

Recently, I was feeding her at the kitchen table. I smiled at my sweet daughter and wondered how, a little over a year ago, I could have been so devastated by this diagnosis. As if on cue, Emmy caught my glance and spread her lips into her famous big grin, showing off a few white teeth. Then she reached her arms out and pulled me in for a tight hug.